My Score 10/10. Now in theaters. At some level we all become the same person trying to get through her/his existence. Listen to my review in the player below.

Lynne Ramsey’s film portrays Joe at that point. He’s good at rescuing sex slaves but can he walk down the street without losing it? I’ve been a fan of Lynne Ramsay since I saw “We Need to Talk About Kevin.” She stood out as a director with something to say, or maybe what she has to say is that we need to be talking about that level we are all on. 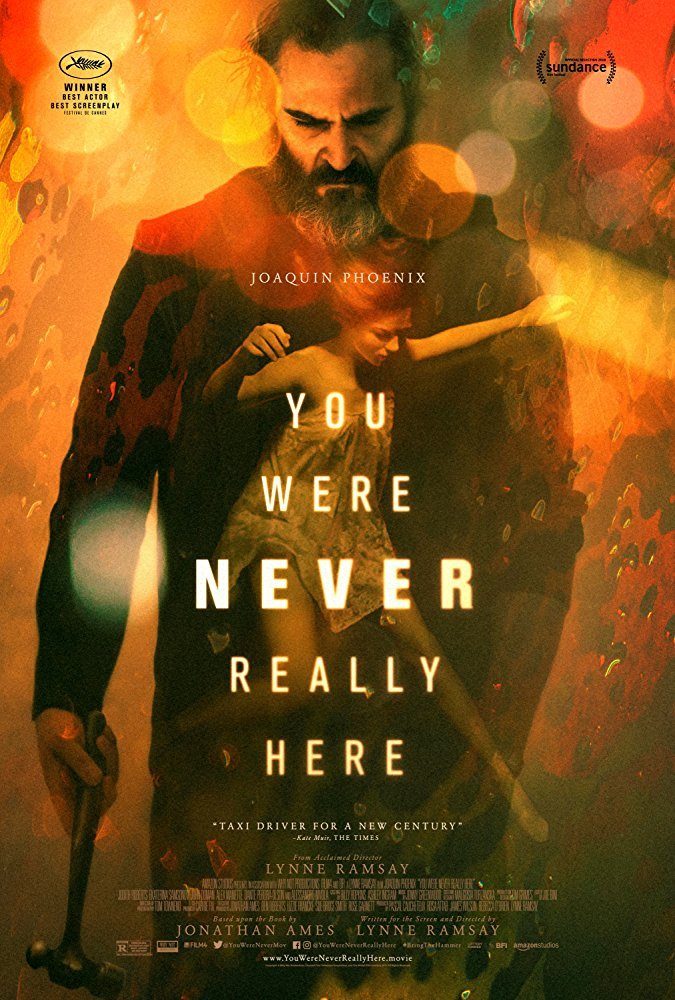 A traumatized veteran, unafraid of violence, tracks down missing girls for a living. When a job spins out of control, Joe’s nightmares overtake him as a conspiracy is uncovered leading to what may be his death trip or his awakening.
Director: Lynne Ramsay
Writers: Lynne Ramsay (screenplay by), Jonathan Ames (based on the book by)
Stars: Joaquin Phoenix, Judith Roberts, Ekaterina Samsonov

Lynne Ramsay’s career started with her film “Ratcatcher.” Soon after that she directed “Morvern Callar.” These films, as I understand, are also about individuals deftly making it through a seriously fucked up situation. No one can tell these people about the world as they know what it’s about before you start. It’s dark. Still there is a beacon of survival that floats to the surface of the darkness. Her films are not filled with hope per se but they do show a way through. If there is one, we will find it. Is that hope? Maybe. Yeah, I think it is. There is a seriously jaded tone in her work and I am attracted to that. It’s as if she telling her audience she isn’t here to spoon feed them but lead them to drink at their own water source.

Joe (Joaquin Phoenix) is definitely a seasoned professional, albeit jaded. He’s fucked up in the head from the war but he also knows a thing or two about saving young girls in sex slavery. Can you have one without the other? He’s not hung up on the deadly risk of his work because he seems to invite death. There are borderline hallucinatory scenes throughout. In the beginning we see him taking care of his aging mother and mock-asphyxiating himself in closet plastic. It flashes to a young by doing the same thing. We see him as seriously messed up individual who is making it as best he can unable to shake the demons and responsibilities of this world. When he picks up the hammer to do his “work” we see we’re dealing with a gifted pro but at the same time, he can handle a gun.

Joe’s use of a hammer as a weapon is a way of showing he cuts through the bullshit of appearances. To him, a gun is heavy. A hammer is light and gets it done quick. When he goes into houses, trying to find these girls he;s been hired to find, they are lived in but plain. These look just like “our” houses. I couldn’t help but think if the finger was pointing at middle America and the secret sins it hides at home. When they kill his mom, it’s one of the legs on his mental table. He doesn’t teeter, he crashes mentally. It’s hard to keep the line straight between good and evil, in fact it sort of dissolves into a vengeance chapter. As he lays on the floor with the dying assailant he holds his hand as if to say, “You aren’t fucked up man the world is.” And why does he take so much time burying him in the lake in an almost funeral like manner? Could he be thanking him for taking his mother to a better place? He seems reborn after this event. And how about the beautiful day outside? What was being said there?

I was very happy to see many critics agree this is a 100/100. It’s got very little dialog but the music acts as a narrator. It is incredible. Be ready for a slow burn that doesn’t do the work for you, you have to think and negotiate what this means for yourself. I loved it. 10/10.