“I don’t want to play with the animals anymore.” -Thea

They can’t all be Oscar winners. They can’t all be big budget. Once in a while, they can be fun with the most minimal resources. Working with what it has, “Zoombies” is too much fun and who doesn’t want a movie like that? 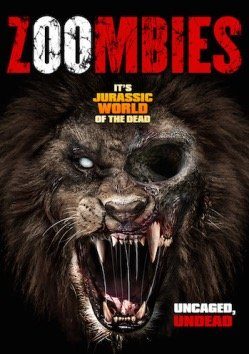 This film is pure fun. It doesn’t try to be “Jurassic Park” but borrows from some of its conventions. The same might be said of it borrowing from “Pet Sematary” and “The Night of the Living Dead.” How about that scene in M Night’s “The Happening” where the lion chews the zookeepers arm off? That was dime. Excellent effects. Scenes like that are mimmicked with low-budget and mixed effects. It was done on the same sort of budget those Discovery Channel dinosaur shows have. It uses canned CGI along with mediocre camera techniques to tell the story. It was funny and exciting, though it could have been funnier.

It all takes place in a new zoo that is doing some testing before it opens to the public. It’s a good thing too because somehow a monkey has been infected with a zombie virus. What happens next is the standard action, zombie, animal film (if there is one). I don’t know but I certainly knew what was coming next. My eight year old and I had some laughs eating popcorn and watching zoo animals wreak havoc on a team of Zoo workers and volunteers. Some ideas are so silly and fun, you could entertain people with puppets.

Don’t expect much from this film, you’ll have a chance to love it that way. I thought of funnier ways to make it but I’m no director. If the idea of animal zombies sounds funny and cool to you, this film is right up your alley. I recommend it.